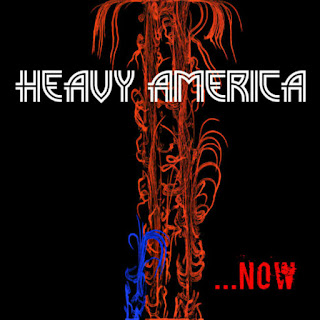 Beyond the heyday of grunge, there’s been a whole revolution of modern bands adopting 60s/70s songwriting tactics and production techniques.  Some bands can’t quite catch the vibe and end up as parody while others sound like the real article.  After repeat listens, Boston three-piece Heavy America prove that they can nail the feel with authenticity and integrity.  Straddling the fence with hip-shaking rockers, layered minimalism and songs combining the two worlds, these cats offer up plenty of variety on their latest recording …Now.

Although not quite a concept album but more of a collection of likeminded tunes, …Now is still best enjoyed as an uninterrupted whole.  There’s a flow from track to track that starts with lead-in belter “Proud Shame.”  Half indie styled alt-country and half bellowing blues rock damage, “Proud Shame” shimmers in the verses and wails with abandon in the choruses.  Vibrant lead vocals courtesy of Mike Seguin range from growly Tom Waits’ whiskey chants to arid, dustbowl crooning.  Clean guitars and wandering rhythms quickly turn to smash n’ crash, rocked-out mantras, a similar tactic that follows true on “Bleed Mary’s” simultaneously sweet and surly guitar work, pulsating bass damage and fluid drumming.  There’s not really a lead instrument here with each player (guitarist Mike Seguin, bassist/keyboardist Bud Lapham, drummer Dan Fried) all painting individual brushstrokes onto the canvas that congeal into a crystal clear portrait.  Shorter, sharper and more straightforward “Pray for Me” does away with ambient build-ups and song structure swapping for a heavy, weighted rocker that sounds like Helmet’s syncopated surgical strikes gone full-on blues rock.

After the opening trilogy establishes the band’s forward reaching arc, the rest of the album delivers on the promise.  Bud’s swinging bass licks cement a presence straying from outside of Seguin’s stark, noisy guitar melodies on the bustling swagger of “Sweet Kisses.”  Jazzy cymbal splashes and near off-time beats make what could be a simple rock song something more dissonant and oblique as a second half melody break brings the mood down appropriately.  Smoky, searing riffs swirl amidst the sound of a phone ringing on the bipolar shuffling contained within “Casting Stones,” an easy album standout.  A hymnal keyboard hum drenches the softer parts in blue-collar sweat which explodes in a fury fever during well-fortified bouts of knockout moonshine riffing befitting of a more experimental version of Clutch.  “Goliath” is sheer southern-rock might; the kind they don’t make anymore, again reckoning of Clutch with monster 4/4 blues churns lit up like a Roman candle by scattershot lead work via Seguin’s fireball frets.
Just as the album began with a killer triplet of vastly unique tunes, it ends the same way; “I Can Take It” rings with trippy ambience befitting of Pink Floyd jamming with Queens of the Stone Age (circa Self-Titled and Rated R) with phased-effected guitars and space-rock riffing, “Heavy Eyes” touches on relaxing electric folk and “Achilles Fail” utilizes the gruffest vocals on the record and apocalyptic doom-y hard rock n’ roll.

With no two songs sounding exactly alike yet a uniform theme running throughout the record, Heavy America crafts …Now into an underground winner that is probably too smart for mainstream radio but of serious value to real music fans.  Advanced songwriting is prevalent from the first note to the last and dedicated rock fans that are looking for some music with meat on the bones will be truly satiated by what they find.
Posted by Blog Admin at 7:41 PM