Elliot Schneider - Don't Put All Your Eggs in One Basketcase (2017) 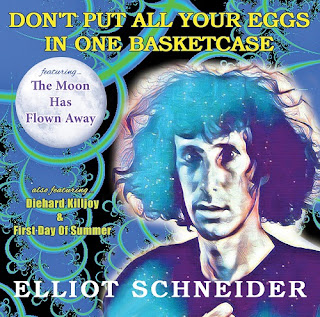 Never let anyone make you believe in the cliché of rock and popular music being a young person’s game. Youth isn’t a pre-requisite for fearlessness and energy. Elliot Schneider’s Don’t Put All Your Eggs in One Basketcase doesn’t sound like the work of a senior citizen; these are songs still vitally engaged with life and never afraid to take chances. Naturally, there’s the sort of far reaching command over both technique and expression one might expect from an older, evolved writer and performer, but there’s exuberance in the performances that couldn’t care less about chronological age. The eleven songs included on his latest studio album mark him as an artist still committed to growth rather than consigning themselves to moribund nostalgia. It makes for another impressive effort from this singer, musician, and five star writer. He continues to push his talents further and further out with each new outing and exhibits idiosyncrasies that few musicians and performers can match.

“The Moon Has Flown Away” is the album’s ideal opener. There’s a level of nuance in the way Schneider has written these lyrics that’s quite unlike anything else you’ll hear in the modern landscape. The mixture of specific imagery with more general details and often familiar tropes is perfectly synthesized. Schneider’s singing brings its potential home with understated emotiveness and coolly confident phrasing. “Diehard Killjoy”, the album’s second track, never locks into a truly memorable groove and shifts musical gears a little too often, but it does sport a number of satisfying aspects and a smart lyric. There’s an appealing elegiac quality in the song “Lost on the Radio” and a bit of rousing call to action crouched inside the lyric that he plays with genuine earnestness. He gives the song a breezy arrangement, complete with some colorful organ blasts, that juxtaposes with the lyrics quite well. “Are We Only Dinosaurs?” whips up some more of the retro rock and roll sound he latches onto at various points and puts it together with a sarcastic, darkly comic lyric. It gains a lot from his dry tone of voice – never overplaying the comedic elements makes them even more effective.

“In a Sense Innocence” highlights more of the unique attributes, including a penchant for memorable titles, separating Schneider from many of his peers and contemporaries. Backing vocals are present elsewhere on the release, but no song utilizes them to such a degree as this one and it helps underscore its mood as a pastoral ballad of sorts. He exhibits a much harder rock edge on the track “A Key to You”, but he’s a rare writer and performer who can retain a meaningful degree of nuance even in guitar heavy trappings. “Overruling Neo-Fascists” is certainly cut from a different mold as it couples offhanded political commentary, colored with a distinct punk flavor at key points, with Schneider’s affinity for classic rock and roll tropes. The recurring flutter of guitar notes, in its own small way, is emblematic of Schneider’s approach – otherwise innocuous seeming embellishments make put real flair on these songs. The track “First Day of Summer” is a track written many years before and once considered for production by none other than iconic guitarist Les Paul, but it comes to such vivid life here that it sounds like Schneider finished the song a little bit before the recording session. The keen sense of engagement he brings to the song casts it in the tradition of the earlier “In a Sense Innocence”, but it varies in important ways. Don’t Put All Your Eggs in One Basketcase is much more ambitious and serious-minded than the album title implies, but the unique personality Schneider brings to these performances is undeniable. It’s an release that’s both entertaining and emotionally affecting.
Posted by Blog Admin at 1:12 AM