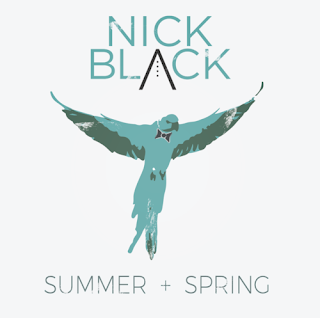 The beauty of an album like Nick Black’s Summer + Spring is manifold, but primarily lies in how effortlessly it comes together. There’s a confidence level propelling these songs reaching well beyond Black’s relatively paltry twenty eight years on the planet and there can be little question, even after a single pass from a first time listener, that Black has the stuff long careers are made of. His skills as both a guitar player and vocalist are substantial enough that he could likely dominate any release featuring him, but it’s a testament to his musical vision that he resists any such temptations on this album and his work preceding its release. Instead, Nick Black’s Summer + Spring comes off as a fully realized band effort with a well rounded performance greater than the sum of its individual parts.

It kicks off in noteworthy fashion with the song “Joy to the Girl”, a surging and tightly arranged funk track that shows off the band’s collective chops while never allowing one player to dominate the performance. Black’s vocal has the same vitality that we hear from the instrumental performances and he rides the groove with assertiveness beyond his years. His guitar is a major source of fire in the song but never loses its musical direction despite coming across as full of spit and vinegar. “Summer & Spring”, the album’s title song, has a much jazzier air than the opener and the relaxed jaunt the band takes will win over many listeners. His vocal embodies the same relaxed mood and steers its way through the arrangement acting in near perfect complement to the instruments. He takes a slightly more commercial direction with the song “Change” and, despite its serious subject matter, the songwriting never invokes its themes with a heavy hand either lyrically or musically. One won’t mistake the lyrics on Summer + Spring for high flown, pseudo poetry, but it certainly has a level of conversational eloquence quite suited to its classy arrangements.

“Runaway Heart” offers a spotlight moment for Black’s vocal chops and he hits a decidedly bluesy note in this dramatic tune. The drumming is especially on target and frames the song nicely. Listeners enter a decidedly funky stretch in the album’s running order with the trio of songs “When the Morning Comes”, “Lay It on the Line”, and “Dance in the Light”. Of the three, the first is by far the hardest pure funk tune while “Dance in the Light” merely echoes the two earlier tracks in atmospheric ways. “Lay It on the Line” does an excellent job of straddling the line between soul and funk to create a compelling hybrid. “Diamonds” echoes those funk influences some, as well, but there’s a different thrust to the song’s percussion that has a jazzier base. The last number on Summer + Spring, “The River”, is another change of pace as Black strips everything down to a pure acoustic blues that his voice really excels with. There’s a completeness to this album that few other releases, any genre, equal nowadays and it’s the best effort yet from this top notch singer and musician.
Posted by Blog Admin at 4:26 PM